Sharon Musgrave was born in the UK, and raised partly in the Caribbean and in Canada. Her career shot to prominence in the 90’s with William Orbit. She left Canada for London in 1986 to pursue a career in music. She achieved international chart status with the hit “Fascinating Rhythm” (Virgin) which Sharon performed and wrote. In 1992 Sharon was asked by WEA Records to worked with jazz pianist Julian Joseph on his “Language of Truth” album, performing Curtis Mayfield’s, “The Other Side of Town.” The first single. 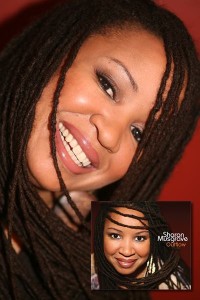 After a career span of 10 years of touring all parts of the world, Singing Commercials and constantly honing in on her writing abilities, she returned to Canada to settle and have a family. But her calling for creativity and performance brought her back on the stage in 1998, when she produced her first solo album project “Selah” with renowned engineer L.Stu Young.
Her Canadian solo release “Selah”(Zosar) earned her two nominations from the Urban Music Association of Canada – “Best Songwriter” and “Best Spoken Word”, for the album’s title track “Selah.” The video shot to the top 20 on Bravo’s video chart count down. She performed throughout Canada after making a debut performance at the Toronto Jazz Festival at Harbourfront Center.
Then in 2003 a dance track she wrote and performed entitled “Nobody” was internationally released on the CD “Soulfragettes”, the song was then singled out for “Ibiza Lounge-3”, a compilation which includes Nora Jones and Coldplay.
In 2009 “Fantasy,” was released on producer Steve Miller’s, Electrosensitive album. A dance track she co-wrote and performed, (Defected records). Also included on (Hedkandi) Beach House Compilation.
January 2012, saw the release of her track “Circles” produced by DJ Thor, on Chillbar Vol. 3 out through the dance label (Sine Music.)
Musgrave’s newest Solo project “Outflow” produced with Peter Grimmer plus remixes from international DJ producers, affirms her song writing and vocal prowess as a jazzy, soulful, funk, hiphop, dance fusion goddess. It’s a treasure to embrace, with the magic of its first single “Beautiful Music” available online for download and can be ordered from her site, HMV.com, or Amazon.com, also available on itunes.
SHARON MUSGRAVE
Websites/Stores
https://itunes.apple.com/us/artist/sharon-musgrave/id6348730
https://soundcloud.com/sharon-2-1
http://www.twitter.com/#!/ladymusgrave
http://www.sharonmusgrave.com
https://www.facebook.com/sharonmusgraverhythmicsoul
http://www.youtube.com/user/zosarmusic
https://plus.google.com/102951388661158851348/post