Let me tear it all down. In America, we think destruction is the answer for our rage, our despair and our cry for a fair deal. Let’s examine what happened in the 1960’s. “Burn baby burn!” This burning of our cities led to a few good things: the opening of new college opportunities; new jobs for the upwardly mobile, prepared individual; and it opened up a door of hope. But now let’s look at the negatives. No one wanted to live in violence. Everyone who could leave the “burn baby burn” neighborhood left.

Now let’s look at the year 2016. The norm again has become “tear down your neighborhood.” Throw a whiskey bottle on the street because you are angry with the world. Someone’s car run over the glass and their tire has bursted. Let me throw the Dunkin Donut bag I have finished on the street. Another evidence of anger and venting of despair. 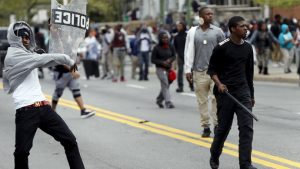 Who is hurt by this behavior? For starters, the children in the neighborhood cannot play on the street for fear of this anger. Trashing the street has torn down the neighborhood. Has this behavior solved the problem? If you think about the trash, this makes the community look like a chaotic, ugly place. But if you have a place where the streets are clean and the yards are neatly kept, you have a ray of hope that one day there will be a better future.

Let us ponder for a moment. Could you clean up the street? Would a clean street look nice and represent hope? Where there is order and cleanliness, you have hope for a better day. Please consider this when you tear up your neighborhood. When an individual is tearing up his street, that person is destroying his/her spirit and any hope of improving his/her personal situation.

Back in 1950, I remember poor neighborhoods where poor people lived. However, the poor individuals were neatly dressed and spoke excellent English. Everyone seem to think these behaviors indicate you were the personification of a young person who was moving up in the world. Why? You respected yourself. If the yard was trimmed and neatly cut you had a ray of hope that in the future, there would be a better day. Where there is hope, an individual conducts himself like there is a future that will be beautiful.

Has tearing up your community helped the poor people in your community? Has the behavior made the streets a safer place for old people and the children who live there? History indicates violence begets violence. All of the violence has historically lead to the physical and spiritual death of a society. Is this what we are seeing in America?

Next time you throw a piece of paper on the ground, or the next time you break glass or a bottle on the street, think. Is this the answer to your hopelessness about your life? Is there a positive response to your awful dilemma? If there is an answer, it will involve work and time to turn your life situation around. Rome was not built in a day. Rome is one of the most beautiful cities in the world.

Please think before you trash your community. All the good folks suffer where there is the negative behavior and anger. If you disagree, do you not see people fleeing from violent neighborhoods in our country? Do you want to be left alone? This is the ultimate result of the negative activity of tearing it all down because of your despair and hopelessness. Ask yourself: Do you want to be left alone?