Home
Artist of the Week
Brandon  Trevon was born September 26, 1987 in South side Chicago, IL. As a child Brandon showed much interest in music singing before learning to even walk. By the time he reached 4 years of age he would sing and dance at family gatherings. Young Brandon moved to Minneapolis, MN with his mother and younger sister where he would attend school and develop his music skills. Brandon was raised in a single parent  home where he watched his family struggle in strenuous conditions, he knew then he wanted to make a difference with his gift. He joined the prestigious Metropolitan Boys Choir based out of Minneapolis where he traveled and performed at numerous venues including the prominent Orchestra Hall.
By the age of 13 Brandon had experienced performing whether it was local talent shows and was later accepted into John Robert Powers performing arts school where he attended learning about acting and commercials for a short time. Throughout the rest of his teen year s he would continue to write & perform at talent shows and local events. 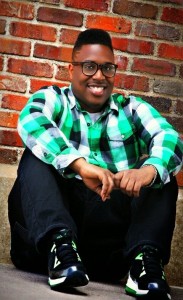 In the present time he works with youth helping them in developing their talents such as writing, singing,dancing rapping, and spoken word in a program he helped build entitled WE ARE HIP HOP. He has continued performing in places like The fine Line cafe, Target Center, Dinkytowner, Capri Theater, colleges and many more. This talented young artist hopes to inspire and influence many with his stylings of R&B, Jazz, Hip-Hop, Pop, Soul and Gospel flavor. He is currently building his fan base, writing and planning work for an independent EP project which he is most excited to get his 1st project completed.
Brandon  has currently caught the acting bug in a play entitled THE DEVIL  DIDN’T RAISE ME where he co-starred in a re-occurring role as the “Deacon” which he didn’t disappoint bringing audiences to tears with his hilarious and rambunctious antics that opened with rave reviews. Now Brandon is currently co-starring in the play “You’re Gonna Miss Me When I’m Gone” as the character “Javon” which premiered September 2013 in Minneapolis, MN and November 2013 in Denver,Co. This production has already taken prominent notoriety from eager fans in different areas such as, Chicago, Tennessee,Mississippi and Nebraska. Alongside “You’re Gonna  Miss Me When I’m Gone” Brandon was apart of the prestigious ensemble of 3X Grammy Award Winning Sounds Of Blackness’ “Twas The Night Before Christmas” at the Renowned Guthrie Theater. With a presence so strong Brandon Trevon isn’t afraid of working toward any heaight that he will not be able to reach,so be on the look out for this talented artist.
Blog Links and Interviews::
http://blog.songcastmusic.com/tag/brandon-trevon/
http://www.hip-hopqueen.com/brandon-trevons-review/
http://issuu.com/truentmagazine/docs/jan_2nd_66 (Pages 6-7 for 2 pg spread)
http://johnspeaks.weebly.com/brandon-trevon-talks.html
http://lynwoodsworld85.blogspot.com/2012/10/exclusive-brandon-trevon-interview.html
http://www.youtube.com/watch?v=Zd08I6MjAkA (KMOJ INTERVIEW)
FEW MIXTAPES BRANDON IS  FEATURED ON::
http://www.datpiff.com/Makin-It-Magazine-Who-Got-Hits-Vol-8-Rb-Edition-mixtape.511437.html
http://www.mixcrate.com/djtomahawk2000/the-let-it-be-loud-207001( UK MIXTAPE DJ HATIM)
http://www.datpiff.com/various-artist-Grind-Hard-Endurance-Drink-Presents-Grind-Pays-6-mixtape.415972.html
http://www.datpiff.com/Makin-It-Magazine-Who-Got-Hits-Vol-9-Pop-Edition-mixtape.5
You can reach Brandon Trevon via:
Twitter: BrandonTrevonMe
Facebook: BrandonTrevonMe
Instagram: BrandonTrevonMe
Youtube: Brandon55443
Soundcloud: BrandonTrevonMe