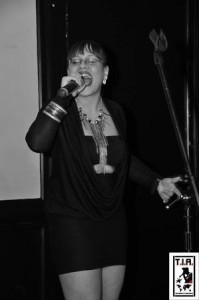 Kicking off 2014 I have the pleasure of chopping it up at The Ish Productions in Edison, NJ with my girl Drea for this months’ One on One interview. Drea is a musically diverse young lady who represents Asbury Park, NJ.

Drea: Thank you for having me!

Mazzi: Not a problem at all. Now I dive right in because I want the interview to be as real as possible and I want to give the people the real ish about Drea, especially since we are at the Ish Productions! We want the people to get to know you. So for our first question, what made you first realize that you wanted to pursue a career in music?

Drea: It’s been in me forever. I feel like I was born for this. As  little girl I would see videos and I would see shows and I would just see myself, you know, instead of seeing the actual artist. And with being in the school band, choir, and stuff coming up, it just felt right that I kept up with it. And then I dropped out of college.

Mazzi: You dropped out of college to pursue music?

Drea: Not to pursue it, but I dropped out of college, and was able to focus in more in regards to what I love to do and what I know, which is music.

Mazzi: What were you going to college for?

Mazzi: Do you see any way to tie that in with you musical movement?

Drea: No. You know how people always say to have a plan b, something to fall back on? That’s why I did political science because I already knew music. I really should have gone to college for music. I would have had the opportunity to strengthen my skills and knowledge.

Mazzi: Ok. How would you describe your music or your movement for the public audience if they have never heard you before?

Drea: Diverse. We have a lot of things going on. Like I rap and I sing. I have my team member Yasin, he raps. Another team member of mine, Talented, he raps and he kind of sings a little bit and plays a little bit, and does a little recording and does a little producing {laughs}. Then you have my producer Frank who does everything, except for rap. He’s a monster. To put it in one word I guess, it would be like, monsters. We’re just monsters. We just do this!

Mazzi: That’s cool how your team has that group feel that allows a collaboration of different skills and talents to flourish in one setting, almost like under one roof or musical umbrella. That’s definitely what’s up. A mean team.

Drea: Yes it’s most definitely a mean team! We also have Piasso, who is affiliated with the Ish Productions. He is like a Latin rapper, clown, and an all around crazy fun artist. He literally paints his face as a part of his act. He is also fashion oriented. It’s a whole bunch of everything that makes our movement unique.

Mazzi: Wow! He sounds like a very interesting artist. I have to meet them all. One day soon. Now if you had to categorize your music, what genre would it best fit?

Drea: Hip hop. And R&B. But I guess you can’t mix it, so I would have to say more hip hop.

Mazzi: Why can’t you mix it?

Mazzi: Hip Hop is that vibe. So if you have the vibe already, you can most definitely combine that with R&B. And that vibe is captured with your sound. It is emphasized in your music.

Mazzi: Now, how does your flow and style differ from other artists in the same genre?

Drea: That’s kind of a hard question. I spit about real stuff, whether my story is relevant to me or relevant to the people around me. My singing and rapping together, I feel like I successfully balance the two because sometimes you’re either just a good singer or a good rapper.

Mazzi: Yup. Sometimes it is hard to focus on and perfect one style. Some artists have tried to run with that ball and fumble. Now you have heard of the term “starving artist” before. How do you cope with major obstacles in regards to moving forward to be successful in your musical career?

Drea: I guess, especially now, balancing everything; work and keeping busy everyday trying to do something, whether it’s going to the studio or going to the gym. You literally have no free days and you have to stay productive.

Mazzi: I hate that, but it’s a part of the grind.

Drea: Yea, I try to stay very productive, do as many shows as I can and try to tackle as many different projects as I can. It’s always doing a lot of everything all at the same time; like I am starting a mix tape, but I also have original music recorded, so I am pushing the projects and working on them simultaneously.

Mazzi: I can relate. I tend to pride myself of being a woman of many hats, so I know the struggle is real! What do you think your biggest break or biggest opportunity has been so far in your musical career?

Drea: So far, the release of a song I did with the legendary hip hop artist Raekwon, which is called “So Good”, has been a big accomplishment for me, other than my album of course. I look forward to working with other artists.

Mazzi: Ok, that’s what’s up. And for anyone who doesn’t know, Raekwon is a member of the hip hop/rap group Wu-Tang Clan. Now, what image do you think your music conveys and why did you choose this image for your music?

Drea: I don’t rap about being naked, unless it’s like a concept of a song, but that’s not my thing. I want people to listen to me, not look at me. Now if they mention that I’m pretty too, then that’s what’s up, but I try to be different. One of my favorite artists is Lauryn Hill. She’s not one of those artists who is motivated by people looking at her. She forces you to listen to her with her voice and musical concepts.

Mazzi: Exactly. She makes sure you hear her voice. How do you feel about the commercial side of the music game? How do you stand your ground as being Drea?

Mazzi: Yes that is a good thing! Now, they say that art and music has an impact on both the young and old. Everyone admires a celebrity and look up to them in some shape or form. What advice do you have for the youth of today, based on your accomplishments, and what advice do you have for the older audience that may listen to your music and compare your lyrics or style to the music of their day?

Drea: For the youth I would say to be yourself and to continue doing what you love to do and don’t let anyone tell you otherwise. If it makes you happy, do it because you are the only one who can make you happy, not somebody else. For my older listeners, do not criticize or be overly judgmental because although todays’ lyrics or todays’ style is different from what it once was, it’s an expression of where we are today musically. You were once young too {laughing}!

Drea: I mean, I do not consider myself to be a “role model”, per say. I am not ratchet, I am not promoting gun violence and stuff like that, and being naked and being promiscuous, but I am human and I can’t please everybody. I act and represent me and I do it from the heart.

Mazzi: Awesome words of advice. What are your immediate career goals, like 1 to 3 years from now?

Drea: Hopefully I will be able to continue doing what I love to do and live off of it. Even if it’s not major celebrity status, I would love to be able to get paid to dabble in the fun side of the music game. Success all around the board; my team eats, I eat, and I am in the position of taking care of those who took care of me. I also wouldn’t mind getting into writing more.

Mazzi: You would get into ghost writing?

Drea: Yea, but more on the R&B side, not really rap songs.

Mazzi: That’s good to know because with USL (UrbanSocialites) we like to take it a step further with our networking and artist promotion role. We like to help Indie artist meet and network with other Indie artists. There is a lot of love in the Indie world and it’s only right that the love gets spread around!

Mazzi: Yup we do what we can! Now, for our final One on One interview question, do you have any other interests or talents that you would like to share with us? And also, how do you like to enjoy your relaxation time away from the music?

Drea: I just like to have fun, relax, and chill out with my peoples. Act a fool, but not get in trouble. Since music is what I love to do, it’s hard for me to find too much to do outside of that, so if I’m not doing anything else, I am doing something with my music.

Mazzi: It’s good to have balance. Between working hard and grinding harder, you need to level out sometimes. What should the people be on the lookout for from you in the New Year?

Drea: Well, I have two shows coming up, one tomorrow night, January 17th, at Alfa Art Gallery in New Brunswick, & Saturday night, January 18th at Mill Hill Saloon in Trenton. My video “Move It” came out New Year day; that was a very good kick off into the New Year for me!

Mazzi: That’s what’s up! If any of our readers are in the areas of either performance I do encourage you to check her out. Also, be on the lookout for her team and The Ish Productions line up. It has been my pleasure interviewing you Ms. Drea!

Drea: Yes mine as well and thank you again for having me!