Home
Artist of the Week
LOWER EAST SIDE (NYC) Artist Ron Oneal Born in Brooklyn, NY October 25th 1985 is a rapper who goes by his given name or simply ‘O’. These days Ron Oneal is a viral sensation. In the era of social media where everyone is a star in their own right, it’s a slightly difficult feature to accomplish but Ron Oneal did just that! All Star Weekend February 2015 the opportunity presented 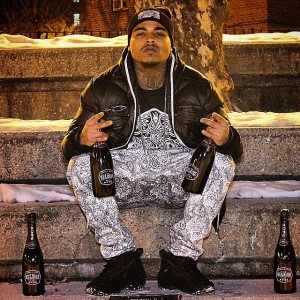 itself in the form of Ron Oneal being in the right place at the right time or depending on whom you ask Maybach Music Group’s very own Rick Ross might have been the one at the right place at the right time.
The scene is set in the projects of Manhattan’s Lower East Side Jacob Riis Houses, Ron Oneal found himself face to face with the rap star. Seizing the moment Ron Oneal unleashed a verbal assault that drew onlookers and had Rick Ross not only rocking but amazed and admiring the talented MC. The result, Rick Ross exchanged contact information with him and later placed him in the “Movin Bass” video. Scores of onlookers captured the moment on their mobile phones & tablets immediately uploading the clips to social media making it go viral.
The clip went viral and was published on several sites such as WorldStarHipHop, Media Takeout, Bossip & More. Ron Oneal essentially broke the internet with now over 2.2 million views collectively and 1 million views on WSHH alone! While most artists might get lazy or cocky over an experience like that Ron Oneal would not be lead astray, he knew all too well how it felt to be on the downside and not deliver when people are routing for you, he didn’t always win.
A few years ago Ron Oneal got, what to him was his biggest shot, a coveted spot on BET’s 106 & Park to showcase his skills to the world however the pressure to succeed was so immense it caused Ron Oneal to choke making him lose. It was a hard blow to Oneal, one he lived with for years. But he never gave up, instead he started grinding harder, drawing strength from his biggest inspiration and supporter, his mother! As fate would have it, he would redeem himself but stay humble after the Rick Ross encounter. He has since been working on his Mixtape “IF NOT ME WHO”, has his song “Double Check” (All Eyes On Me) ft Sv Skee – https://goo.gl/LtRQQX currently spinning on Power 105.1 by Dj Will & Dj Self, collaborated with R&B artist B. Morgan & rapper Haitian Jak on song “Come N Get It”. Opened up for French Montana Memorial weekend in Portsmouth Virginia and has internet radio buzzing with songs “Hitta O”, “Ya Boy O” and “On My Job”. 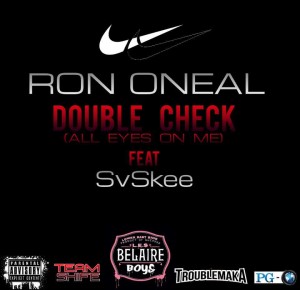 Ron Oneal graduated from the infamous Seward Park High School whose famous Alumni include Golden Girls actress Estelle Getty, comedian and actors Keenan Ivory Wayans and Luis Guzman and now Ron Oneal to name a few. Unlike your typical depiction of a rap artist, Ron excelled in academics specifically in the subject of math. When you hear rapper, mathematician doesn’t come to mind but again Ron Oneal is not your ordinary rapper and plays the numbers game very well.

In fact crunching numbers is something he often does when he’s not rehearsing rhymes in his head. Music has always been a driving force in Ron’s life, so much that it became the common ground with a person he initially didn’t care for, his current partner Sv Skee. Oneal and Skee met due to a fight they had with each other in their neighborhood, the Jacob Riis Houses aka Alphabet City. Even though the two lived directly across from each other they didn’t get along until a mutual friend in Junior High School brought them together and they instantly developed a friendship. Oneal’s love of rapping and creating music would ultimately influence Skee and thereafter, Skee began to act as Oneal’s hype man. One year later they were writing together as a team.

“I didn’t know how it was going to turn out till we did a couple songs, but the chemistry was so great,”

Some of Ron Oneal’s earlier work like “Super Fly” and “Day After Tomorrow”, caught the ear of production heavyweights like The Heatmakerz & Rockwilder and also received positive feedback from highly regarded emcee Prodigy of Mobb Deep. Even though Oneal was very pleased with this recognition he was still not satisfied, because these people weren’t looking to work with him or the group in an extended capacity. With a new mixtape “IF NOT ME WHO” Hosted By Dj Self in production, the highly anticipated mixtape will feature music from the group (O&S) as well as collaborations with other up & coming Producers. Ron Oneal is gearing up to start touring TBA

RON ONEAL Spits for Rick Ross and gets his contact info. 1 Million plus views on WSHH