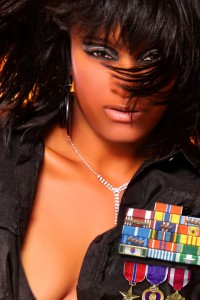 Tara Courtney (also known as Courtney Danger) is an amazing and phenomenally talented singer/songwriter/ producer from Trenton, New Jersey. Tara recognized early in her life a strong affinity and passion for music.  Her passion was grown from her love for playing both the trumpet and violin, and nourished by her favorite artists from all different eras such as Billie Holiday, Stevie Wonder, Minnie Riperton, Whitney Houston, and Chaka Khan, just to name a few.

Since becoming a mainstay and much sought after performer, songwriter, and composer in her hometown of Trenton, New Jersey, Tara decided to branch out to the surrounding cities to make her indelible mark. She has made several strong and memorable appearances in New York, Philadelphia, North Carolina, and Delaware. She has graced the stage with Reggae superstars Beres Hammond and Lutan Fyah and Hip Hop legend Wise Intelligent, front man of her home town hero’s The Poor Righteous Teachers.

In 2010 while Tara was working on her debut album, she noticed and felt that the R&B music that she was raised on and loved, had become a pale reflection of its former greatness. So she took a giant step back and began to create a new sound that bridges and reflects the extremely diverse collection of musical influences that have inspired her throughout her young life. Tara Courtney’s new music has splashes of R&B, Hip hop, Jazz, Pop, Classic Rock, and Dub Step music blended perfectly together into a new sound that she calls “Dangerous”.

In the mists of creating this new “Dangerous” sound Tara gave birth to the most extreme, insatiable, and artistic side of herself. This new being is called Courtney Danger and her main purpose is to breathe a much needed breath of fresh air into today’s one dimensional musical landscape. She made her feature debut in 2011 with Wise Intelligent, (of Poor Righteous Teachers) on 2 songs from his critically acclaimed 3rd solo album, “Wise Intelligent Iz…The UnConKable Djezuz Djonez”. The first song was “Intelligent Dezign” and the second was the HIT “UndergroundSpiritualGame ” that peaked at over 70,000 video  views on Youtube. These 2 songs contain and reflect the essence of both Tara Courtney and Courtney Danger and give you a small glimpse of the great future of ahead of her. In addition to engineering on Wise Intelligent latest album “El Negro Guerrero“, Courtney released a video for her remake “No Love” (originally “Enough of No love” by Keyshia Cole) and it climbed to over 4000 views in 3 days.

While continuing to release music under the forever changing “ United State of Danger” project name which features a series of Re-makes including “On The Radio” (a remake of Cassie & Fabolous “Radio”) & Danger’s Room (revised from Drake’s Marvin’s Room), Courtney co-wrote the released “Work” for artist Liveyah Lee that featured Philly’s own rap artist Gille the Kid,

Since the beginning of 2014 Courtney Has released 1 new record entitled “I’m Yours, My Love” and has been featured on 3 released songs with another 7 in the arsenal thus far. She also has a plethora of songs written for NJ artist B Smith (known for his engineering work done with “City High”) whose album is nearing completion. Taking her talents further than before Courtney became a partner in a Production company called Oil House to expand her expression into the visual world and has begun to pin down her first production proposals for the remainder of 2014 and beginning of 2015. Courtney has no plans of slowing down. Singles from her debut album “GROWN” are expected to begin being released online late 2014 with the album itself being available in 2015.

Buckle under and get ready to enter…DangerVille!

Nothing is off limits!!!