Home
Artist of the Week
Phil is a contemporary singer/songwriter who has earned excellent reviews from the national press, with his thought provoking songwriting and energetic, often unpredictable live performances drawing comparisons to Neil Finn, Glenn Tilbrook and Ben Folds. 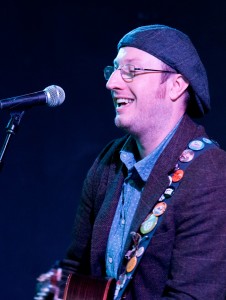 Having been the frontman for The Haiku for 6 years, 2012 saw him go it alone, and play a host of solo shows, including highly successful support slots for Mark Morriss (The Bluetones) and Dave McPherson (InMe).  During his live shows, he makes a real connection with the crowd, often starting and finishing the shows entirely unplugged and shunning the stage to stand right in among the captivated audience.
2014 saw the release of his solo album “Half Live”.  Wanting to capture the feel of his live show on a studio recording, Phil recorded two live shows and took them in to the studio to add a few little extras.  The result is an album which revels in the rawness of a live concert, but still presents the songs the way Phil hears them in his head!