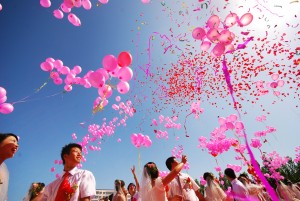 Celebrate love ….Chinese style. Today is Chinese Valentine Day. It is also known as the Daughters Festival and several other names (see below). It is celebrated on the seventh day of the seventh month of the lunar calendar.

This holiday is one of love. Its romantic (and lovely) that this holiday evolved from an ancient love story from Chinese folklore. As a result of being handed down from generation to generation over thousands of years, there are several versions of the story.

Here is one of the the most popular versions of the story:

The Goddess of Heaven (also known as the Queen of Heaven) had seven beautiful, young daughters. The seven daughters came down to earth. They decided to bathe in a pristine river, leaving their clothes on the shore. Along came a cow herder (the herd were actually ox) named “Niu Lang”.  He took their clothes to see what they would do. The daughters decided that the youngest, and most beautiful,  named Zhi Nü should go out of the water and recover their clothes. Because Niu Lang saw her naked, they had to get married. They fell madly in love, and shared several years of marital bliss.

Finally, her mother became irritated by her absence from Heaven, and ordered her to return. Seeing how much Zhi Nü missed her husband, the Jade Emperor of Heaven brought the couple back together. Ultimately, Zhi Nü was allowed to visit her husband, Niu Lang just once a year. The annual reunion occurs on the 7th day of the 7th month of the Lunar Calendar.

Other names for this holiday include: