This month, which is November, exactly 10 days from Turkey Day to the exact time of posting, I have the pleasure of chopping it up with King Ramses, straight out of Asbury Park New Jersey, also known as the Jersey Shore. 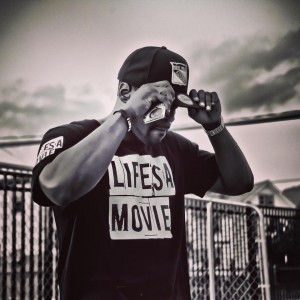 Mazzi: So for my first interview I was able to lock in one of my favorite artist from my neck of the woods

Mazzi: Yes. Jersey is in the building. So, lets dive right in, you ready?

Mazzi: So, what made you first realize that you wanted to pursue a career in music?

King Ramses: It definitely wasn’t something like I woke up one day and said I wanted to be a rapper. I have two older brothers that were listening to hip hop since the beginning of hip hop so I just kind of fell in love with it, kind of like through them, kind of wanted to be like them and I never lost the love for it. It’s just like a thing that was always in me.

Mazzi: So it was always there, the music side of it

Mazzi: Ok. How would you describe your music for the public audience if they have never heard you before?

King Ramses: How would I describe like my style?

King Ramses:  I like to call my style like “street hop”.  People call hip hop, real hip hop, the “back packing” type of vibe, the conscious side of it, and relate it to artists like Talib and Common, and then you have the street side, artists like the Lox and Beanie Sigel. My style is a fusion of these two sides of hip hop; I am one of those guys that can open up for 50 cent and open up for Mos Def and still get the same amount of love… I give you good ol’ regular hip hop mixed with the street view.

Mazzi: Ok so I am most definitely adding “street hop” to my musical vocabulary. That is a dope breakdown of your {musical} style. Now if you had to categorize your music, what genre would it best fit?

King Ramses: It’s crazy because I believe musically, I am both {street and conscious}; I am very conscious of the things I say. I try not to put too much ignorant energy out there you know?  Everything is not positive because you know we are from the hood so I reflect on things like that. But at the same time too I understand it’s entertainment, I understand that people don’t want to get taught every song or want to hear all these compound syllables. So I like to bring both to the table as a hip hop artist, so I feel that King Rams fits in to the hip hop genre, hands down!

Mazzi: In listening to your music, I agree with your feeling. With that, how does your flow/style differ from other artists in the same genre? Yes I am making you think today I love it {laughing}.

King Ramses: Yea yea {laughing}. When it comes to my style, I feel like I’m not pigeon holding one style. I kind of flow off the beat, the beat kind of tells me how to rap off. So I can’t even compare my style to anybody else because my style varies every time a different type of track comes on. And you know I got my own story. My name is Ramses Frage so no body can tell my story better than I can.

Mazzi: That’s whats up. Now, I know you’ve heard the term “starving artists” before; how do you cope with major obstacles?

King Ramses: Yea I think my picture is next to the definition. Write about it that’s all. It’s the grind and it’s what you have to go through. I think that it’s no way around it, when you’re starting you’re going to be a “starving artist”. So I deal with it because I know I have to deal with it to get to where I need to go. It’s no big thing, just write about it to relieve the stress.

King Ramses: It’s like small, but being flown out to Tampa {Fla.} to do a show, really my first paid gig show, was my biggest break. Also being able to have my music reviewed by MTV {Steven Hill} was a big thing for me. Other than that everything is a step forward and every day there’s another “big break” happening.

Mazzi:  Now, lets touch on your your image. What image do you think your music conveys and why did you choose this type of image for your music?

Mazzi: And you chose this image because its real to you.

King Ramses: Yea it’s real. It’s more people maintaining in my lane than there is people balling. That’s who I speak for.

Mazzi: Art and music has an impact on both young and old. Everyone loves a celebrity, so what advice do you have for the youth of today?

King Ramses: I haven’t officially come up myself so anybody that’s reading this can take it for themselves if they want to, but I’ve learned that to be something you have to first be yourself. Don’t follow what you think you have to rap like, don’t dress the way you think you have to dress like. Like if youre trying to be Lil Wayne, its not going to work because there is already one Lil Wayne. So you can put fuzzy shorts on and ride a skateboard if you want to but its not going to work. So I just feel like you have to be yourself. One hundred percent regardless if it doesn’t fit what’s going on on the radio, you just have to be yourself and people will be attracted to you.

Mazzi: What are your immediate music career goals, like1 to 3 years?

King Ramses: Definitely land a situation, not necessarily like a record deal, but more like a distribution deal. That’s definitely a goal.  And trying to get on the XXL Freshman of the year by like next year. But definitely to get a situation. That’s what it is.

Mazzi: Definitely get into something. It’s coming. Now for my tenth question for this one on one, do you have other interests or talents you would like to share with us, and, how do you like to enjoy your relaxation time away from the music?

Mazzi: Word? That caught me all the way off guard!

King Ramses: Nah Im playing {laughing}. I like to shoot videos. I have a film company called Life’s a Movie. I have probably shot 80 videos the last two years. That’s what I do outside of rapping. Even though it still ties in with music and hip hop and all because I have love for the whole spectrum of music, that’s what I do for my relaxation. If I’m not rapping I’m shooting a video.

Mazzi: What should the people be looking forward to from King Ramses?

King Ramses: October 4th, I was invited out to the AC3, Atlanta festival, which is the biggest underground hip hop festival, 300 artist, 50 venues, so I had the opportunity of being out there performing some of my new material.  I also have my first project, which is a mixtape/album, dropping  called ‘Love my Music Vol. I’. And  around November 25th   my second project, ‘The Making of Ramses Part II’, will be dropping.

Mazzi: Well King Ramses, our one on one has sadly come to an end. I thank you so much for taking the time to sit and chop it up with me and also for being the first artist on the show.

King Ramses: It has been my pleasure and I am honored that you chose me to be the first artist!

Mazzi: No doubt! It’s all love. We wish you much success and look forward to hearing more from you in the future!

And to you, the readers, thank you for tuning in. Make sure you stay tuned for more NMNJ One on One in 10!